Tbilisi, Georgia, October 2013. In a wood-panelled hall that was once used by film censors to screen and inspect films, the avant-garde electronic artists that comprise Düsseldorf band Kreidler are at work on “ABC”, their next album. And in the midst of it all: internationally-renowned experimental filmmaker Heinz Emigholz.

In long camera shots, Emigholz observes the collective, creative process – and the creative pauses. While these takes constitute the backbone of the film, they are joined by “inserts” of two sorts: scenes featuring architectural settings in the city of Tbilisi, and images of notebooks, written and illustrated by Emigholz, that are being leafed through in animation-like sequences.

“2+2=22 [The Alphabet]” presents a threefold contrast: the work of creating music; documentary footage of the site of this creation – a former Soviet republic; and the poetic thoughts supplied by a more western-influenced voiceover. 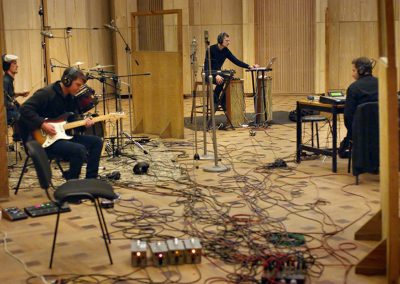 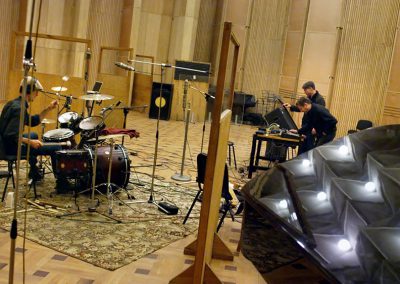