The film’s pre-history: From 4th to 6th of september 1970, on the island of Fehmarn in the Baltic Sea, one of the first open air rock festivals on German soil took place : the Love-and-Peace-Festival – headlined by Jimi Hendrix. He went on stage on the festival’s final day, and what the world had no way of knowing: It was going to be his penultimate live show, as he died only 10 days later in London.

There exists a great variety of footage from the Hendrix show itself and the festival as a whole, from „official“ TV news to various amateur images. A group of local filmmakers (now mostly based in Hamburg) made it their mission to unearth these audiovisual treasures: For over 10 years now, they keep on collecting photos and footage, examining facts and rumors, eventually digitizing images and shooting interviews. All of this became a film for the first time in 2010, shown under the title of JIMI – THE FEHMARN-FESTIVAL. 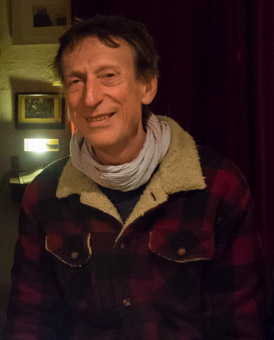 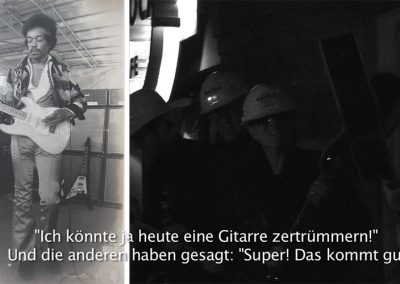 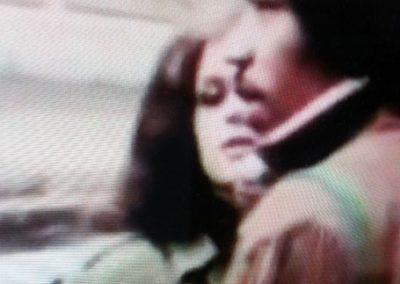 But as new images from the event do not stop to pop up, as always more people come around saying that they had been there, too, this film project just continues to grow, „like a stalactite“. It is Rasmus Gerlach, one of the involved filmmakers, who brought up this comparison. He also calls the project „a work in progress FRG 1970 – 2020“, or in an even more defying way: „the oldest and longest long-term observational movie of the world“. Knowing that modesty is the worst form of vanity (vaguely according to Mr Oscar Wilde), he adds: „JIMI’S GERMAN WOODSTOCK also is one of the very few films about Jimi Hendrix which at least has a few grains of truth in it. Because no musician has been more lied upon than the undisputably most influential guitar player in the world to date. Most notably, his legendary gigs at the Star-Club in Hamburg and his last open air at Fehmarn are subject to the most curious mythologies, so that it becomes practically impossible to discern the trueness behind them. In our team today, we have a guy who filmed Jimi Hendrix at that time.”

“By now, our film project cast its skin several times and has evolved into becoming a history workshop in moving images. You can see in it all those people Hendrix was dealing with while in Germany: Uschi Obermeier and Rainer Langhans, Eric Burdon and Ron Wood, the photographers Günter Zint and Frauke Bergemann, but also the many fans, like festival-hopping Peter Walter, whom we buried not long ago close to the Hendrix memorial stone in Fehmarn, illegally … Today, the film’s freshest version begins with a sonic bomb that we threw over the river Elbe by playing very loud Hendrix’ „Star Spangled Banner“ as a protest to Trump’s visit at the new concert hall of Hamburg, the Elbphilharmonie, on the occasion of the 2017 G20 Hamburg summit – a musical performance.“

Those who want to understand how significant the marks were that Jimi Hendrix left behind in Germany – which means: in the minds of generations of people, showing that his work continues to exist in the most diverse and sometimes quite weird ways -, shouldn’t miss this screening.

Rasmus Gerlach, once again: „During the Jimi-Walk prior to the screening, one can walk in the footsteps of the Hippie icon Hendrix when staying in St. Pauli. The tour starts in front of Jimis beautiful laundrette aka St. Pauli Waschküche, at Hein-Hoyer-Str. 12. What serves as a laundrette today, used to be a dry-cleaner’s where Hendrix got is stage costumes refurbished after his shows at the Star-Club. Today, in the laundrette, there is a permanent exhibition of photos of the establishment’s famous client.