Music Is The Art Of Time – LP Films

Buldozer – Spit Truth Into The Eyes
Pankrti – No Fun
Laibach

Ljubljana-based company Nord Cross Prod. conceived a series of feature-length documentary films about the most important Slovenian pop music records. Under the umbrella title “Music is the Art of Time”, and over a stretch of 12 years, three films were produced about three seminal albums from the country’s underground – and it has to be underlined that when all of the three productions happened, Slovenia was still part of Yugoslavia, so the music had an according resonance. The serie’s subtitle “LP film” (which stands for “long-playing film”) clearly indicates that the central topic of each documentary is a vinyl record. Underscoring this new film format is the fact that the record is heard from beginning to end in the background of the movie. 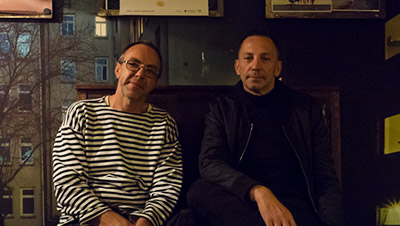 Buldožer– Spit truth into the eyes
Buldožer is considered one of the key bands in ex-Yugoslavia. Its debut LP, Pljuni istini u oči (Spit Truth into the Eyes, 1975), changed the country’s musical landscape significantly. The band’s progressive rock music was a mix of dozens of influences, from popular rock to alternative pop and jazz, blended into a unique style that was directly opposed to the then-established local pop scene. Buldožer’s art was all-embracing: their onstage performances were manic explosions of creative lunacy that either shocked or enchanted. Their lyrics were a poetry of irony and absurdity, seemingly lacking in meaning, but creeping into people’s everyday language and becoming popular phrases. Their connection with the media was to mock the impotence of the popular press, showing its reckless readiness to publish every piece of shit they could get, as long as it promises a readership — during socialist times already!

The band’s debut LP is a summary of all that. Not only did it manage to make record sales before finally being banned, but it continues to resonate even after four decades, as it is re-discovered and re-claimed by new generations of musicians from all territories of ex-Yugoslavia. In the film, members of the band as much as friends and fans recollect their memories. Shot as fake TV news, these testimonies are combined with staged elements, details from the LP cover, archival material and animations, creating a fresh and surrealistically ironic documentary — not only of a band and its legendary album, but of our whole society and today’s times.

Pankrti – Dolgcajt (No Fun)
In this film the LP in question is a punk record called Dolgcajt (No Fun), released by the band Pankrti (Bastards) in 1980, just before Yugoslav president Tito died. Pankrti acted as a detonator for many events on the local music scene, synchronizing pop culture in the socialist state with movements in the West, breaking out of a closed society, and eventually changing history.

The movie concentrates on events in Yugoslavia between 1977 and 1980, a period stretching from the debut concert by Pankrti – the very first punk show behind the iron curtain – to the release of Dolgcajt (No Fun) which was the band’s first record.
The period at the end of the 1970s in a socialist state is reconstructed through extensive use of archive material (official TV programs as well as personal archives) and through accounts by more than 60 individuals (musicians, journalists, music critics and other people from the scene at that time). The film’s central character, though, is Marin Rosić, a true fan. When the Dolgcajt (No Fun) album was released, he was only 15 years old. Yet up to this very day, he believes in the message that it communicated to the people. He says with a lot of conviction: “Without punk and No Fun, the Berlin Wall would have fallen later!”

Laibach
A film about the first official release by the avant-garde rock band Laibach in Yugoslavia in 1985 – since the band’s name was politically prohibited at the time, the record came out without a title or name on the cover. A black cross was enough to make it clear whose album this was. The film concentrates on the first five years of these self-proclaimed “engineers of human souls” by investigating the background to their first LP and the inspirations of its co-creators, including the tragically deceased frontman of the group, the “riddle within the puzzle at the heart of the mystery”, Tomaz Hostnik (1961–1982).

Combining the testimonies of members of the band, their colleagues and contemporaries with archival footage and other relics, the film reveals the strategies and tactics of Laibach and Laibach Kunst in the first half of the 1980s, their vision and wit, their breakthrough from behind the Iron Curtain, and their “Occupation of Europe”. Thus, the film goes past the group’s monumental mythology and provides more intimate, until now unheard stories to the spectator. The main focus remains the albulm itself and its songs: “Dear Friends”; “Force”; “In The Midst of Struggles”; “The State”; “The Decree”; “We Are Forging The Future”; “Brother of Mine”; and “Panorama”—all of which represent the foundation of Laibach’s opus. Thus, the film provides a re-assessment of Laibach’s artistic rigor, a necessary operation after the band’s rather unfortunate experience in North Korea, captured on big screens worldwide by last year’s doc LIBERATION DAY.