However, the jury did not take this decision lightly and so the total prize money of € 2,500 of this year’s competition will be distributed among two participants: The 2nd prize of 1.000,- € goes to EMBRYO – A JOURNEY OF MUSIC AND PEACE by Michael Wehmeyer.

The reasons given by the jury:
The film, Soviet Hippies draws very conclusively with strong protagonists* a picture of the hippie movement in the Soviet Union and its political implications, explaining the social phenomenon from the musical vibe. The Soviet hippie movement is well contextualized, also in relation to Russia’s current situation. In impressive images and interviews, the film shows that comparable developments have taken place beyond the western countries, where 1968 and its consequences have been historically acknowledged in many formats, and thus at the same time makes a contribution to the beginning decolonization of pop music historiography.

Embryo – A Journey of Music and Peace deserves the award because film and band contain a message that is “dangerous” for our time: WORLD PEACE! The film itself donates inner PEACE for listeners* and breeders*. It impresses, inspires and even makes you happy with a well told, comprehensible story! The film manages with the simplest means, creates a masterpiece with classic editing techniques and the use of archive material. This is real art! Just like the musicians’ collective itself.

Embryo is not an ordinary band, but a social sculpture. Therefore the film is also an important contemporary document of young German music history and because of its peace message it is also very valuable from a media pedagogical point of view. If, instead of political interests and fads, we were to follow the universal language of all people – which is called MUSIC – we would now have world peace. Where others remain on the surface, embryo is a deep well. And therefore: Embryo!

The jury also praised the film L7 – Pretend we’re dead by Sarah Price:
The film shows with exciting historical film footage the development of the band from the art and performance scene in Los Angeles from the 1980s to the dissolution of the band in 2001 and their comeback in 2018. The film footage of the band is commented from off by the band members. The result is an authentic portrait of the band, which impressively shows that excessive rock on stage is absolutely no male domain!

Many thanks to our wonderful jury! 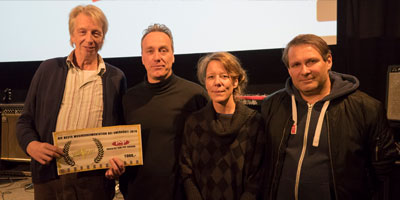 The best music documentary at UNERHÖRT! was awarded at the 12th edition by the jury members Skrollan Alwert, Carsten Heinze and Cornelia Lund.