This is not how Michel, Joyvan, Lázaro and the 14 others imagined it. In 23 hours, their first concert will begin in Santiago de Cuba. Everything is ready for departure: Laptops, lights and sound system, flyers, posters and turntables. The 17 DJs, VJs and producers from Havana are finally ready to go. Only one thing is missing: a bus. Michel, the producer of the tour, is desperate. Privately, there are no more buses, and the state won’t give any out. “They have almost 240 buses, and 100 of them are broken.” Havana’s DJ guerrillas are on a publicity tour on their own behalf. With tattoos and piercings, with big sunglasses and cool shirts, they are heading across the island for the first time. In their luggage they have their music, electronic, loud, a mix of techno and traditional sounds. While half a million ravers bounce in front of the Brandenburg Gate in Berlin every year, there has never been a techno gig in Cuba outside Havana. And now a whole tour. The bus finally arrives, sets off – and breaks down halfway. 17 musicians push a defective 15-ton truck through the heat – until they can’t take it anymore. There is no replacement bus. So they get out the speakers, crank up the stereo, and the first gig goes up in a café in the middle of Cuban nowhere. “There’s nothing impossible, just incompetent people,” Michel says. Fat Cuban women dance polonaise to the beats. 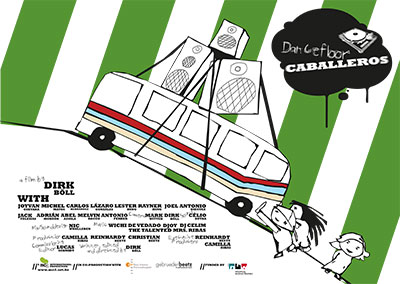