The film’s title literally means: “You cannot get through the mirror”, and it refers to a song of the Post-Punk band Messer (Knife) on their third studio album called “Jalousie”, recorded in December 2015 in Kulturgut Haus Nottbeck, a cultural institution in a Westphalian countryside.

The film follows the band members during that recording process – and we see five musicians taking distance from eachother and approaching again via machines and instruments, through negotiation and conflict, rites and experiments, trying to find common ground and get to a shared result. By watching the band members interact, filmmaker Manuel Gehrke develops his very own point of view: Alongside scenes with dialogue, his creative documentary lives of moody images (many of which were shot in black and white), of sounds and noise, as much as of singer Hendrik Otremba’s narrating voice.

Manuel Gehrke studied Dramatic Art at the University of Hildesheim. Durch Den Spiegel Kommst Du Nicht is his first feature-length documentary. Before that, he was a close collaborator for the production of visuals of the bands Messer, Die Heiterkeit (The Gaiety) and Sleep, making music videos and stage settings with moving images. He lives and works in Hannover. 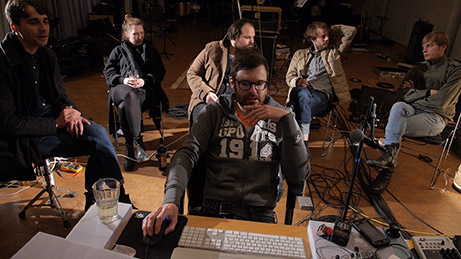 ← Embryo - A Journey Of Music And Peace Bandonion →
Music Films 2018